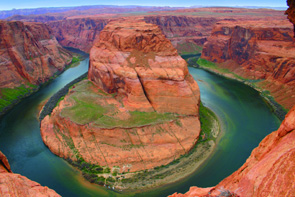 How old is the Canyon?
That's a tricky question. Although rocks exposed in the walls of the canyon are geologically quite old, the Canyon itself is a fairly young feature. The oldest rocks at the canyon bottom are close to 2000 million years old. The Canyon itself - an erosional feature - has formed only in the past five or six million years. Geologically speaking, Grand Canyon is very young.

How does one see the Canyon?
Nearly five million people see Grand Canyon each year. Most of them see it from their car at overlooks along the South Rim (this includes Grand Canyon Village, Hermits Rest, and Desert View). The South Rim - 60 miles / 97 km north of Williams and 80 miles / 97 km northwest of Flagstaff, Arizona - is the most accessible part of the park and is open all year. A much smaller number of people see the Canyon from the North Rim, which lies just 10 miles / 16 km (as the raven flies) directly across the Canyon from the South Rim. The North Rim rises a thousand feet higher than the South Rim, and is much less accessible. Heavy snows close the road to the North Rim from late October to mid May of each year. Even in good weather it's harder to get to: it's 220 miles / 354 km by car from the South Rim, or 21 miles / 34 km by foot across the Canyon by way of the North and South Kaibab Trails. The inner canyon includes everything below the rim and is seen mainly by hikers, mule riders, or river runners. There are many opportunities here for adventurous and hardy persons who want to backpack, ride a mule to Phantom Ranch, or take a river trip through the Canyon on the Colorado River (which can take anywhere from a few days to three weeks - there are no one-day river trips through Grand Canyon). How do people get across the canyon? If you're walking, the South Kaibab Trail crosses the Colorado River on a narrow foot bridge 70 feet / 21 m above the water. There is only one way to cross by automobile, and that is via Navajo Bridge, just a few miles downstream from Lees Ferry, where the Canyon is still only 400 feet / 122 m wide.

When is the best time to visit the Grand Canyon?
Expect heavy crowds during spring, summer, and fall months. You will find fewer crowds in the early spring or late fall. The South Rim is open year round, but heavy snows close the road to the North Rim from late October to mid May of each year.

Winter - Winter conditions at the South Rim can be extreme: expect snow, icy roads, and possible road closures. Temperatures are low, and with the wind-chill factor can at times drop below 0° F (-18° C). Canyon views may be temporarily obscured during winter storms; in such cases, entrance fees are not refundable. The North Rim is closed in winter. 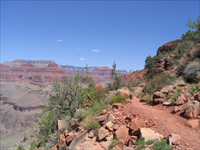